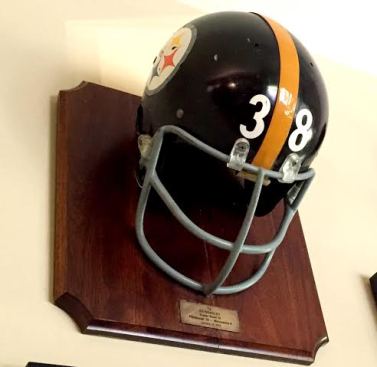 winning record seasons in thirty-eight years. Bradley didn’t know anything about the team. He grew up a fan of the New York Giants. Luckily his roommates were from McDonald, Brownsville, and Johnstown, Pennsylvania, so they were able to fill him in about “the Burgh.”

Within two weeks, Bradley was up at training camp for the Steelers at St. Vincent College. Bradley had a successful rookie training camp, where he went through the normal hazing rituals of standing up in the cafeteria and singing to the team, and drinking all night so he had to “lose his lunch” at the next day’s practice. During the next two seasons, the Steelers and Coach Noll established the greatest defense to ever play the game, which included “The Steel Curtain.”
Bradley was a special teams star and was the back-up to one of the greatest linebacker corps ever, Jack Lambert, Andy Russell, and Jack Ham. That defense had a line that included “Mean” Joe Greene and L.C. Greenwood and a backfield with Mel Blount. Bradley got his chance to become a hero for the Steelers in their first ever Super Bowl.
Super Bowl IX was played in New Orleans at Tulane Stadium. During the second quarter, Jack Lambert went down with a bad ankle injury, and Noll called Bradley’s number 38 to replace him at middle linebacker. “The Steel Curtain” didn’t skip a beat with Bradley replacing the hall of fame linebacker.

The Steelers were playing the Vikings, who were led by another hall of fame player, quarterback Fran Tarkenton. When Bradley came into the game, the Vikings referred to him as “turkey.” Bradley played such a great game that the broadcaster kept referring to him as Lambert. The Steelers went on to stop Tarkenton and the Vikings, and won their first Super Bowl, 16-6. Coach Noll said after the game, “Bradley was beautiful. He made big hits and big plays.” Bradley said, “I had a hell of a game. We wanted to win one for our owner, the Chief (Art Rooney) and we did!”
He went on to win Super Bowl X with the Steelers in their victory over the Dallas Cowboys. In 1976, he was selected by the Seattle Seahawks to join their inaugural team and became a team captain. “It was like going from the penthouse to the outhouse, from going from a Super Bowl Champion to a two-game winning team,” said Bradley. He played a year in Seattle and started two more seasons for the San Francisco 49ers before a leg injury forced him into an early retirement. He said he is and will always be a Steeler at heart.

What is your favorite North Carolina Beach?
Ocean Isle
What is your favorite place to go in the NC mountains?
All those years going up to Western, I love Cullowhee and Sylva. Lots of good times there.
Do you make it up to Pittsburgh for games very often?
We try to make one game a year. In 2014, I got to see all of my favorite teammates at the 40th reunion of our first Super Bowl. I got to take my wife and kids, and their spouses to the event. We were honored at halftime of a game against the Saints. There were twenty-eight of thirty-four of the living players at the game to share that experience. This year, Jeff and I went up to see them on a Sunday night against the Colts.

They won that game didn’t they?
It was a good ass-kicking. I loved it.
When you aren’t in Pittsburgh, where do you like to watch the games?
At home. I have two big-screen televisions that I can watch the games on from our kitchen and living rooms. (He wasn’t kidding. When I visited the house, you literally can see a big-screen television any way you look in their main living area. He even has one on the porch, if he needs to go out there to watch on his own).
Can the Steelers win the Super Bowl this upcoming season?
I think that way every year. Come on man! Hell yeah! Think team first guys.
Do you have any favorite players on the current team?
Big Ben (Roethlisberger) for sure. He has always been under-rated. He is solid, smart, and fundamentally and mentally strong. James Harrison is a freak of nature, a real beast. I love seeing him keep coming back at his age.
What is different about the game today than when you played?
Well number one, the players now are so much bigger and faster. I wouldn’t say they are tougher! There is a lot of specialization now. We used to block back, tackle below the knees and clothesline for tackles. For good reasons, they got rid of a lot of that. It’s still a dangerous game. You have to love it!
Do you have any great memories of Coach Noll or the Rooney family?
We won that first Super Bowl for “The Chief” Art Rooney. He was a great man. The Rooney’s are class acts for their benevolence and kindness. Coach Noll was a true genius and renaissance man. He knew more about classical music and wine than football. I was at the U.S. Open golf tournament in Pinehurst when he passed away, and I got to go up for the funeral.

What was it like playing on the greatest defense of all time?
You know, we knew we were good back then. Once we put on our helmets, we knew another team couldn’t beat us. Obviously we won a hell of a lot more than we lost. Coach Knoll was such a great coach because he surrounded himself with an exemplary coaching staff. We knew we couldn’t be beat!