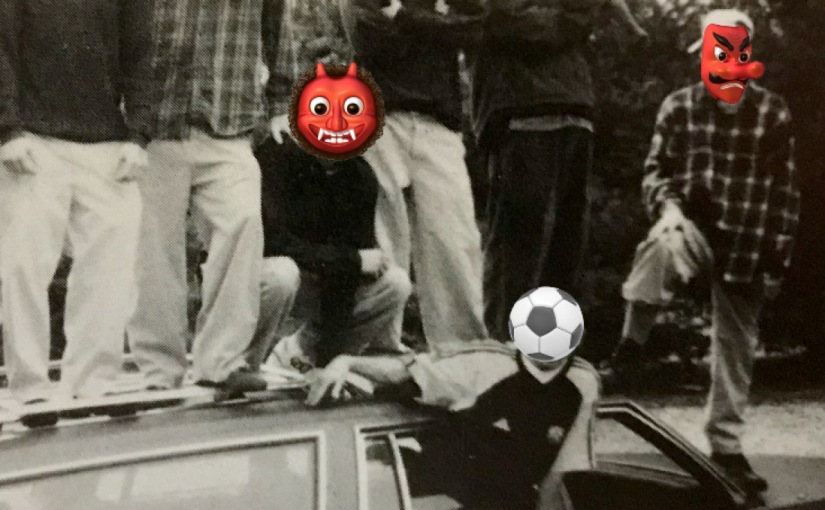 It’s hard to believe that my 20th R.J. Reynolds High School reunion is just around the corner. In honor of being out of that great place for so long, I will sporadically blog on some of my memories as a Demon during the late 90’s.

When you think of gangs, you think of mean dudes with tattoos that go around and do some seriously bad things. Circa 1996, Winston-Salem had a gang that was the antithesis of any gang that might come to your mind when you think of the term. This group of friendly guys was known as Da (not the) Bomb Squad. I personally didn’t know any of the members (wink wink), and it took a lot of hard work to find out how this bunch joined forces.

Here is the brief story of Da Bomb Squad:

One night a group of friends saw an advertisement for chicken pizza at Pizza Hut and they knew they had to try it. They paked into a 1985 navy Jeep Cherokee and headed to the Stratford Road Pizza Hut (now some sort of four-wheeler store). The Jeep was somewhat gangster because it did have a gigantic Wu-Tang Clan sticker on the back. Any believe that the Jeep was gangster was negated because it also had a Dave Matthews Band sticker on the back.

After chowing down on several exquisite chicken topped pizzas, the group headed out to do whatever shenanigans they were going to do that night. When you think of Molotov cocktails and gangs, you probably think of the gangs using them to throw at other gangs or the police or something bad. Da Bomb Squad became Da Bomb Squad when they found a Molotov cocktail burning in the middle of Westview Drive, in between Stratford and Country Club. The Jeep deftly swerved around the makeshift bomb, it had a really cool driver. Instead of doing something gangster like putting the bomb out or finding another gang to throw the bomb at, the group drove to the Country Club fire department to report the burning object in the middle of the road (this is during the beeper era and before cell phones).

They were so excited that they made this discovery, the teens actually followed the fire truck back to the scene of the bomb and watched them put it out. They then decided to call themselves Da (not the) Bomb Squad.

When you think of gangs and memberships you think of wearing colors on bandannas and tattoos. You also probably think of initiations where the new members get beat up to join the gang. Da Bomb Squad did the least gangster things possible. Instead of colors, they made a t-shirt with Da Bomb Squad on the front and their names on the back (who actually puts their name out there if they are in a real gang?). Instead of beating up new members, they just asked some of their other buddies if they wanted to join the group.

The only real gangster thing about the group was the names they gave each other: Smokie, Blazuh, Bull, Red, Bizzy. Unfortunately, the group also put these names on their shirts. Over the next year or so, this group roamed the halls of R.J. Reynolds and the streets of Buena Vista, West End, and Ardmore not scaring a single person. Only one of them could truly fight, so the group used their wits and not their muscles and befriended a lot of big guys that could protect them.

Like many high school endings, Da Bomb Squad disbanded over a girl. Two members liked the same one and that was that for the least notorious gang to roam the streets of Winston-Salem. The members went on to do non-gangster things after disbanding. Two of them did end up in the drug related field, but they didn’t become drug dealers, they became doctors. Other members are bankers and work in advertising, while the most handsome member of the lot went on to become a college soccer coach/writer/dad, but I didn’t really know that guy.

The only Winston group to ever be less threatening than Da Bomb Squad was members of the RJR class of 1999 (lame-o’s), who labeled themselves The Swat Team. At least Da Bomb Squad actually found a bomb.